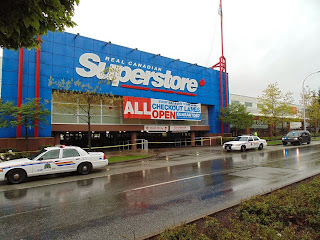 There was a bomb threat at the Real Canadian Superstore at 14650 104 Ave in Surrey Today. The whole store was closed down and the bomb squad was there. After the scene was deemed safe the store was reopened for business as usual. However, I do want to comment on protocol.

Obviously any bomb threat no matter how ridiculous it sounds has to be taken seriously. My concern is this huge amount of secrecy every time there is a police scene. I know I'm idealistic and live in a fantasy world but in my dream world the public isn't kept in the dark and isolated so much. If there's a police scene all they have to do is say I'm sorry the store is closed there's been a bomb threat. Oh OK. Or, there's been a shooting or a stabbing and we need you to stand back. Oh OK. Thanks for keeping us safe. Instead we are told nothing and are alienated by the police.

I realize that they have to protect the integrity of an investigation but if there is an incident near your home or workplace, you should be allowed to know what is going on. After the scene was deemed safe the employees were forbidden to discuss the matter with the customers. I had to weasel around and talk to non employees and other customers to find out what really happened.

Seemingly someone left a bag in the store and said it was a bomb. OK that has to be treated seriously but if it was someone in the store who left a bag and said it was a bomb they have them on surveillance video so finding out who it was shouldn't be a problem. My first question is was it some crack head? After the store reopened a new set of customers arrived who had no idea what was going on and I told one guy who asked what was going on that there was a bomb threat but the scene has been deemed safe now. The guy just shrugs it off and says who is going to bomb a grocery store? I chuckle and said you have a good point.

In any police scene it would be nice if the public were told a simple basic fact instead of treating them like idiots and keeping them in the dark. No one wants to live in a police state.