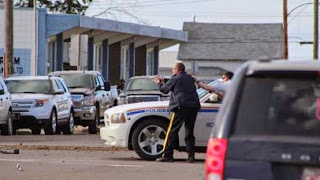 CBC is reporting that three Mounties are recovering from their injuries after a shooting erupted on the main street of St. Paul, in northern Alberta. The gunman was killed in the confrontation.

6 p.m. Friday officers responded to gunshots outside the local RCMP detachment. Police saw a black Dodge pickup truck leaving the parking lot, and officers followed the truck as it sped towards the downtown core. At that point, the driver of the truck seemed to intentionally ram a police cruiser, trapping an officer inside the vehicle. Police say that's when the man opened fire. Chief Supt. Randy McInnes says the officers returned fire, killing the gunman.

McInnes says the female officer inside the police vehicle suffered serious leg injuries. A male officer was shot in the hand and another was hit in the face with flying glass. Both men were treated and released. Meanwhile, officers found another man dead while responding to a medical distress call nearby.

CBC is now reporting that a Catholic Priest was the murder victim. Father Gilbert Dasna an associate pastor of the St. Paul Cathedral parish, was alone in the rectory when he was shot in the chest. The Diocese confirmed he was shot more than once.

It's not clear if the death of Father Dasna and the downtown shooting incidents are related, but police say the two scenes were within a few blocks of each other.