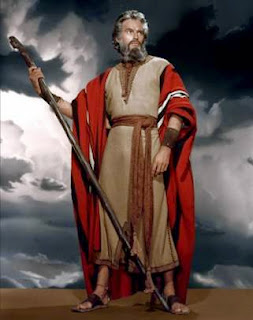 We've talked a fair bit about corruption on various levels. Political corruption often seems overwhelming all on it's own. When we add that to corruption in the upper levels of the police force right up to corruption in the HSBC and on Wall Street it is understandable why so many people adopt the way of the ostrich and bury their heads in the sand. Unfortunately that's not going to make the problem go away in real life. It's like Moses and the golden calf.

It's pretty hard for us to comprehend how any intelligent being could possibly worship a golden calf yet we do in our day. We worship our own golden calves of greed: luxury cars, clothes and jewelry. It's not about worshiping statues it's about worshiping materialism and greed.

Moses was quite the military commander. He killed an Egyptian guard. The Israelites were slaves in Egypt. One of the guards raped a slave's wife and Moses lost it. He beat the guard to death. No doubt he got in trouble for that and went into hiding for a while.

The Book of Jasher claims Moses went south into Sudan and Ethiopia. It contains an interesting story about how Moses led the armies there against an evil power that was in a fortified castle protected by a moat filled with poisonous snakes. It seemed impenetrable but Moses thought outside the box.

He got a group of soldiers to each get a baby crane as a pet and train it. When the cranes were mature he took the army along with the soldiers who had the cranes to confront the castle. The cranes ate the poisonous snakes and Moses' army took the castle. Not bad for doing what they said couldn't be done. That story is found in the book of Jasher which isn't in the Bible or the Apocrypha. The Bible quotes the Book of Jasher but it's not in the Bible. It's one of the lost books missing from the Bible.

Moses is famous for leading the children of Israel out of slavery in Egypt into the promise land. He told Pharaoh Let my people go. When I was on a non religious Kibbutz in Israel I was surprised they celebrated the passover to commemorate the event. I asked them about it and said I thought you guys were non religious. He said we are. This isn't a religious thing it's just part of our history.

Anyways, the biblical story claims Moses went up to the mountains to pray and when he came back he found them all dancing naked around a golden calf. Moses lost it. He couldn't believe they could degenerate so fast after such miraculous things happened in their escape from Egypt. He smashed the first set of commandments and said Who is on the lord's side? Let him come unto me. Then the Levites gathered and they slew 3,0000. Of their own people. They had to cleanse the inner vessel before they were able to proceed to fulfill their destiny.

Can you see where I'm going with this? Right now we face a huge amount of corruption. Right now this level of corruption is a bigger threat to our civil liberty and to our prosperity that Hitler, Stalin or Chairman Mao. Those enemies stood on the other side of the battlefield and tried to conquer our liberty and turn us into slaves. This new enemy is from within. They pretend to be our friends and wrap the flaxen cords around our neck until their lies choke us into slavery.

As tempting as it sounds, I'm not saying we go Boondock saints and start executing all the corrupt politicians out there. Words will retain their power. I am saying we need to be aware of the problem and confront it before we proceed just like Moses did in the past. CSIS is corrupt. The CIA is corrupt. MI 6 is corrupt. This secret combination is a greater threat to our liberty that Russia, China and North Korea combined. Edward Snowden is a hero. Support him.