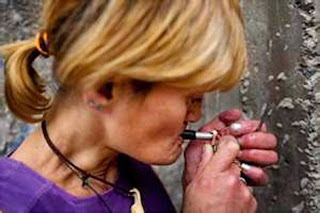 Stoners of the world, Unite! Recent medical breakthroughs suggest that smoking crack cocaine cures cancer. Not. Give your head a shake. Smoke is bad for the lungs. That's why the leading cause of death in house fires is smoke inhalation. Smoking weed is no different. Pot smoke is even more cancerous than cigarette smoke. We really have to stop believing everything people say without at least thinking about it first. A new Canadian study states relatively heavy smoking of marijuana may as much as double the risk of someone contracting lung cancer.

Drug dealers are telling kids that smoking pot cures cancer. Aside from being false, don't you think the drug dealers have an ulterior motive for telling kids that kind of bullsh*t? Not only is pot smoke bad for your lungs but scientific research admits that adolescents who regularly smoke pot suffer brain damage and a reduced IQ. Adolescents should not be smoking pot.

Let's think about it. Anything that gets you stoned or baked or wasted, can't be good for you. It's no different than alcohol. Getting sh*t faced isn't good for your health. People respond with anything in moderation to which I concur. But people aren't smoking pot in moderation. If you smoke pot every day or more than once a day that's not moderation.

When I was in high school in Surrey many years ago, lots of people smoked pot. Some smoked way too much pot. We called them stoners. They certainly weren't role models. They were examples of people who elected to waste away their lives. Now if someone is a heavy pot smoker we call them an activist. Times have certainly changed. But that's not all that's changed. The pot now is much stronger than it was in the /60's. BC Bud is a lot stronger than home grown was 25 years ago. It even smells different. It doesn't have that relaxing pleasant smell. It smell sharp and poignant because it is a different strain that is much more powerful. It smells like skunk cabbage.

So this is what's happening. The pot today is a lot more powerful than it was 25 years ago and people are smoking it much more often - every day and sometimes several times a day. What do you get when you tell an alcoholic they have a drinking problem? Rage and denial. It's the same thing with pot. Anything in moderation has been thrown out the window. Now it's an obsession to get high every freaking day. Before work, after work, during work. Even while driving your car.

If you smoke pot while driving your car you should get more than a ticket. You should get an impaired charge because smoking pot while you're driving is irresponsible. People say I'm fine to drive when I smoke pot. That' exactly what I mean. That is the problem right there. People are so obsessed with these insane ideas that they think driving stoned is fine when it's not. Just like driving under the influence of alcohol isn't OK either.

I know this is a sensitive issue. I know way too many people in BC smoke way too much pot. I agree throwing them in jail or giving them a criminal record for smoking pot is ridiculous. But so is claiming that smoking pot every day and several times a day is good for you. It's not.

I agree smoking pot every day is way better than smoking crack or crystal meth. I would much rather see doctors hand out prescriptions for medical marijuana to help crack addicts get off the crack. I just don't think tax dollars should pay for the prescriptions. Turning the not very safe injection site into an inhalation site for people to smoke crack is absolutely insane. I do not support that and totally object to tax dollars being spent on cocaine or heroin at Insite.

I think Stephen Harper is wrong and I think Justin Trudeau is wrong. We are going from one extreme to the other. What ever happened to moderation or balance? It's being thrown out the window with extremism on both sides. Justin Trudeau has been a huge disappointment. I really thought he was going to be the solution. Far from it. Now he's just running around like Justin Bieber trying to usher in the Brave New World of state controlled everything.

In the thread on the Misconceptions about Pot, some argued that pot does cure cancer. If you have a bonafide link, post it there. I don't have time to go through them all but Dr. Smythe has made some pretty relevant observations. One person said pot cured Tommy Chong's cancer. Dr Smythe pointed out that's not what the article said at all.

If pot cures cancer how come Bob Marley died of cancer? They call me stupid for having a hard time believing them. There have been interesting claims made about cannabis oil that should definitely be studied but all smoke is bad for you. If you have cancer and you want to try pot to see if it will help, by all means feel free. But don't ignore other medical procedures.

Years ago I knew a lady who was diagnosed with terminal cancer. Her liver was full of it. Some forms of cancer are treatable: skin cancer, breast cancer, colon cancer. When it hits the liver, that's not a good thing. This woman was given 6 months to live. Since she was a young mother she was understandably desperate to find a cure. She went to a very expensive clinic in Mexico where they gave her raw carrot juice. Her money started to run out so she started calling friends to recommend the clinic to get money from referrals.

Then the magic day happened. She told everyone she was healed. They told her the cancer was gone. Right before she died. It was a heart breaking story of how a wonderful woman was conned and how her family were robbed of the last precious six months of her life. Please be careful. Don't let snake oil claims con you into smoking pot every day. There is a lot more to life than that.

Posted by Dennis Watson at 5:26 AM