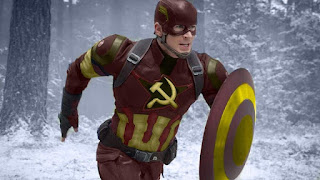 Speaking of Communist lies, the CCP's ownership of Disney has turned Captain America into a Communist. The Daily Wire is reporting that "A new Captain America mini-series from Marvel Comics called, The United States of Captain America, takes a new approach to the legendary hero, portraying Steve Rogers as less of a patriotic icon, and more of a jaded, newly woke, and solemn Avenger who believes the American Dream is really two dreams. And one lie.”

The Daily Wire also reported that "Actor Dean Cain, famed for playing Superman in the TV series Lois and Clark: The New Adventures of Superman, went on Fox & Friends on Monday to rip the new woke incarnation of Marvel Comics’ Captain America, blasting, 'I am so tired of all of this wokeness and anti-Americanism. I believe the pendulum will swing back to openly appreciating American values, the Constitution, the Bill of Rights,' he added."

Meanwhile back on the ranch, the Communist News Network is reporting that "Dean Cain has publicly condemned Marvel's newest version of Captain America, and Twitter is pushing back on his criticisms." AYFKM? Criticized by who? The Socialist Party again?

This shows us how ridiculous the mainstream media is and how worthless Disney has become.

The Communist politicians in China are the richest in the world. There's no sharing the wealth there. That state is built upon slavery and slave labour. The Constitution protects civil liberty by law. The Communist Party of China does not. Hollywood is a toilet of self-indulgence.