State of the Union: Media bias and censorship 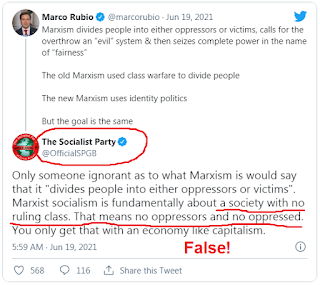 Yesterday I attended a large protest outside the Chinese Consulate in Vancouver. Post Media News, which includes Global Television, did not cover it. Neither did the CBC. That is media censorship. They only tell you what they want you to hear.

Recently MSN ran an article claiming Marco Rubio was slammed for a tweet condemning Marxism. That was ridiculous and absurd. Yet it clearly reveals their bias. These are the same people lying to us about Covid numbers on a daily basis. Thier bias has revealed their agenda.

You know you have entered the Twilight Zone when the Mainstream Media quotes Socialists. Marco Rubio was slammed by the Socialist Party. Slammed meaning they lied. They said "Marxist socialism is fundamentally about a society with no ruling class." Wrong.

Oh, but wait. The mainstream media didn't cover it. They censored that evidence because that is what Communism does. Communism lies and censors the truth. Take Tiananmen square. There was most certainly a ruling class at that tragic event. There clearly was an oppressor and the oppressed. They used live ammunition on unarmed protesters.

China has censored that true information from the Internet in China and lies to its people claiming that never happened. Now they are expanding their censorship and their dishonesty within our media. This is a foreign invasion of our sovereignty.

Recently I saw a video of a couple of people belligerently harassing a couple of employees as they left Castanet. They were shaming them for their misrepresentation of Covid numbers. Although they meant well, they made the rest of us look stupid. It's not their fault.

Over the years I got to know a reporter from Castanet who moved on to another media outlet. We were discussing something through email and he asked me to call him. When I did, he panicked. He said not on this line, on my cell. I had called him at work and he was terrified his employer would find out he was talking to me. That kinda shows you that the problem is coming from the top down. If anyone reported true Covid information they would be fired. That is why we have to seek out alternate news sources.

In the Maritimes, protesters are blocking traffic between the New Brunswick and Nova Scotia border. Although I applaud their sincerity, blocking traffic is not a civic right and it is not helping the cause. It makes people with the truth look like extremists which means the rest of the public will be less likely to listen to them. We want to protect the economy not destroy it. We want to preserve mobility rights not highjack them. This is why we need to have calm rational conversations about the true science and the media bias. The media has become absurd and if we point that out, people can see it for themselves.