A little bit of displaced aggression 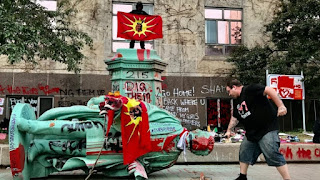 The Communist News Network is reporting that "The statue of Egerton Ryerson, one of the architects of the residential school system in Canada, was toppled and vandalized Sunday evening following a demonstration in downtown Toronto."

"The act occurred following a demonstration downtown in response to an announcement by the Tk'emlúps te Secwépemc First Nation on May 27 that preliminary findings from a survey conducted by a specialist in ground-penetrating radar indicated the remains of what could be 215 children buried on the site of a former residential school in Kamloops, B.C. 'The statue represents racism, the statue represent oppression. It should have been taken down a long time ago voluntarily by the Ryerson University, however that did not happen.' 'It's a little bit of justice I suppose for the Indigenous people, but not enough. It's just the beginning,' Fernando said."

That statue does not represent racism or oppression and vandalizing it is not a little bit of justice. It's a whole lot of displaced aggression. They're going to blame a Methodist minister for something the Catholic church did. That's what they refer to as kicking the cat. Blaming someone for something someone else did. This is how the far left keeps trying to rewrite history.