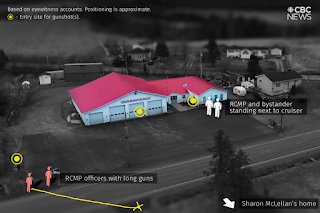 BTW where would Gabe get phosphorus Grenades from? That sounds like Blackwater.

In my last post about Gabriel Wortman and the leaked 911 calls, I came across some startling information. Saltwire reported that an RCMP officer visited a key witness impersonating a member of the Nova Scotia Mass Causalty Commission. He was in reality from the RCMP's response to that commission. In that article the witness said:

Well wait 'till I tell ye. CBC reported that "Sharon McLellan was standing in her Onslow, N.S., kitchen talking on the phone one Sunday morning in April when she saw two men with long guns get out of a nondescript vehicle. She said one ran into the ditch opposite her house while the second man crouched behind a wooden garbage bin in the parking lot of the Onslow Belmont fire brigade's hall across the street. Within seconds, she heard gunfire."

"But when shots rang out at the Onslow fire hall, the man responsible for those deaths wasn't there. Two Mounties fired at one of their own as well as a bystander who was close to the hall near a parked RCMP cruiser. The Fifth Estate has reviewed surveillance footage captured by cameras at the hall. It doesn't show the shooters but reveals a hunched-over man wearing a fluorescent safety vest darting into the fire hall at 10:21 a.m. local time."

"Surveillance footage shows that a few seconds later, an RCMP officer who was stationed in front of the hall was standing with his hands up next to his vehicle." The police were shooting at the police. Were they police officers or were they Blackwater? They came in an unmarked car. 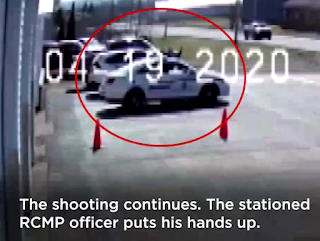 This wasn't one stray bullet. They peppered the Fire Hall with semi-automatic rifles. The witness counted 32 bullet holes. "No one inside or outside the hall was hurt. But bullets peppered the hall's siding over a distance of several metres. The shots went through one of the big bay doors and punctured a fire truck's windshield, fender and engine. Shots also pierced an electronic welcome sign close to the road, which was more than 60 metres from where the cruiser was parked, as well as a granite monument by the building's entrance. A fire truck saved our lives." 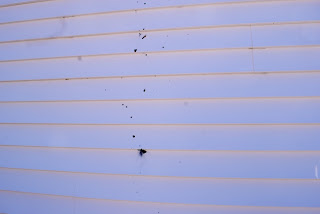 CBC reported that "The fire hall was being used as a shelter." A shelter for what? Turns out they had evacuated residents during the mass shooting and they were inside that Fire Hall.

In the article the witness said the SIRT report is full of crap. Indeed it is. The officers were exonerated of any wrong doing because they claimed they were shooting at the suspect. Gabe was not wearing a yellow safety vest. They lied. They knew the police officer out front was stationed there to protect the residents in the shelter. They caught Blackwater agents red handed.