Perpetual witch hunts and the lies of cancel culture 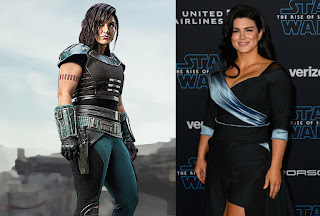 Back in the day, uneducated mobs would burn powerful women at the stake claiming they were witches. Those neanderthals have been resurrected under the banner of cancel culture which is a cancer culture of lies. Disney firing Gina Carano for her political opinion is the perfect example. That's illegal. It's nice to see Disney squirm over the backlash from that dark decision. Disney has become tainted. Gina Carano has more credibility than Disney.

I'm not a big Trump fan. At least I wasn't at first. I supported him over Hillary because Hillary was the embodyment of evil, yet I had my concerns about Donald. What won me over was the cancel culture which hunt. When he was president, leftists would be obsessing on their phones saying "Donald Trump just took a sh*t! He just wiped his a*s after he took a sh*t! Can you believe that?!" Actually I can and you need to get a life.

Although I think Joe Biden is a complete idiot, I certainly don't obsess over every breath he takes. He's an idiot and I don't care. It's a nonissue. I really admire people like Candace Owens, Rob Smith and Brandon Straka. Brandon is still embroiled in a ridiculous witch hunt as are many others. That Capitol hill riot was a complete farce. It was a set up. People were angry. They had every right to be but the police waved them in. The violence and vandalism was from BLM agent provocateurs. That includes the QAnon Quack behind the green screen.

As I said from the beginning, Q was CIA and Joe Biden was the CIA's candidate. Biden and the CIA go back to William Casey. QAnon was the CIAs attempt to infiltrate Trump nation and lead them astray. It was very effective. The Geek behind the green screen later testified that Trump incited him. That was Fake as F*ck. The socialist media is still going on about Capitol hill despite the fact that the violence was BLM and despite the fact that it was nothing compared to the perpetual BLM violence displayed at their regular riots.

There is no question that the world is a better place because of Texas and Florida. Greg Abbott is a superhero. They are the ones that lead the way and opened up when everyone else called them fools. Their success made the lies of the MSM statistically impossible so more States started opening up. Never mind Donald Trump. The world has been saved by Conservatives. Those Conservatives are under attack from the trolls of cancer culture. We can all see it.

Rudy Giuliani saved New York. He became mayor at a time of record crime and debt. He successfully turned the tide making New York safe and prosperous. Bill De Blasio destroyed that. Everyone can see De Blasio's policies were a complete failure. Andrew Cuomo was a big part of that failure. Now, Texas and Florida have become role models for the world.

When Rudy Giuliani was mayor, New York and London were the centre of the Universe. Now, thanks to Cuomo and De Blasio, they are lost groping in the leftist's darkness. Curtis Sliwa won the Republican nomination for Mayor of New York. Curtis can make New York safe and prosperous again. Andrew Giuliani is running for Governor. Can you imagine what a colossal difference Andrew Giuliani and Curtis Sliwa could make? Instead of drowning in crime, debt and taxes, New York could rise up and fulfill its original destiny as a model for the rest of the world.

That is why cancer culture is on full attack. If Andrew Giuliani and Curtis take over, their ship is sunk. Their lies will no longer be believable. The partisan decision to remove Rudy Giuliani's law licence from New York was cancer culture's attempt at punishing any and all conservatives for saving the world from the slavery of socialism. Thankfully, no lie can live forever. 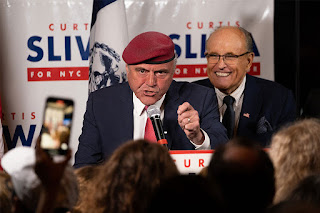