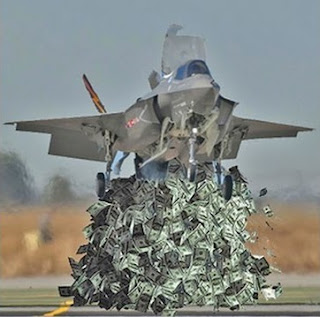 Janes is reporting that "Difficulty sustaining the engine on the Lockheed Martin F-35 Lightning II Joint Strike Fighter (JSF) is contributing to a higher cost per flying hour than originally anticipated, a former programme official and a government auditor have noted." Big surprise.

The F-35 sucks and Lockheed Martin is corrupt just like SNC-Lavalin. They consistently under bid and over charge government contracts and they keep getting away with it because they give the politicians kickbacks in the form of campaign contributions just like the vaccine companies do.

America's most expensive fighter jet is also its worst

Posted by Dennis Watson at 1:29 PM