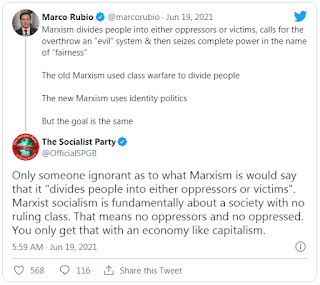 This headline from Bill Gates' Communist News Network is the perfect example of how criminally insane the Mainstream media has become. The article claims that Senator Marco Rubio was slammed for criticizing Marxism. AYFKM? Slammed by who? No one with a brain.

That's like saying he was slammed for criticizing Adolf Hittler. Marxism has murdered more people than Fascism. Fascism and Marxism are the same thing. Who was he slammed by? The Socialist Party for f*ck's sake. This isn't news. This is bat sh*t crazy.

What he actually said was "Marxism divides people into either oppressors or victims, calls for the overthrow an 'evil' system & then seizes complete power in the name of 'fairness' The old Marxism used class warfare to divide people The new Marxism uses identity politics But the goal is the same." What he said is absolutely true. Then the twitter trolls attack.

Jimmy the Vaccinated from BLM said "All politics are identity politics... you identify as a white guy that just happens to speak Spanish... and it shows." That is obscenely racist. Marco Rubio is a Latino from Cuba. Jimmy the Vaccinated is a white guy high jacking BLM to promote Communism. Rob Smith and Candace Owens have consistently spoken out against identity politics. Communism is the mother of all lies because the father of all lies is the author of it.

In response to Senator Rubio's true statement, the Socialist Party said: Marxist socialism is fundamentally about a society with no ruling class. That means no oppressors and no oppressed. That statement is a ridiculous lie. In Communist China there most certainly is a ruling class.

The Uighurs are rounded up into prison camps, undergo forced sterilization and are also executed for their organs. That is oppression. To claim that there is no ruling class and no oppression in Socialism is a bold-faced lie. Everything about Socialism is a lie.

The fact that the Microsoft News Network is promoting Socialism shows the world how utterly worthless that Fake News Network really is. Bill Gates and Geroge Sorros are Communists. They have no desire to share their wealth. They endorse Communism so they can increase their wealth by turning everyone into slaves. Slavery is the end game of Socialism.