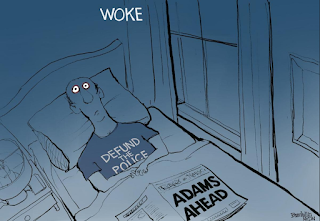 The Financial Times is reporitng that "Kathryn Garcia has moved within striking distance of Eric Adams in a nail-biting primary race for New York City mayor after a new count of ranked-choice ballots wiped out what had seemed like a commanding lead for the retired police captain and Brooklyn borough president." Big Surprie. In come the absentee ballots.

"Former Sanitation Boss Kathryn Garcia Wants to Dig NYC Out of Its Mess as Mayor. But Can She Ditch Her de Blasio Ties?" Everyone agrees De Blasio made a mess. That's the point.

Update: The New York Times is reporting that "The New York City mayor’s race plunged into chaos on Tuesday night when the city Board of Elections released a new tally of votes in the Democratic mayoral primary, and then removed the tabulations from its website after citing a discrepancy." LOL Adams is gonna get Bidened.

"When the board ran the program, it counted “both test and election night results, producing approximately 135,000 additional records,” the statement said. The ranked-choice numbers, it said, would be tabulated again." 135,000 additional votes - that's software manipulation.

"For the Board of Elections, which has long been plagued by dysfunction and nepotism, this was its first try at implementing ranked-choice voting on a citywide scale." It's not rocket science.

"Adams filed a a lawsuit Wednesday seeking to preserve the ballots and voting machines to ensure an accurate count. "Today we petitioned the court to preserve our right to a fair election process and to have a judge oversee and review ballots, if necessary," Adams said in a statement. The lawsuit filed in state court in Brooklyn named the Board of Elections and the other Democratic mayoral candidates as defendants." Well said.

2020 deja vu. Careful, the Democrats are going to take away Adam's police license. There's no question Adams is their best candidate because he is the closest thing they have to Curtis. That's why they won't let him win. They are determined to run the sacred City into the ground just like de Blasio did so they can create a federal police force.