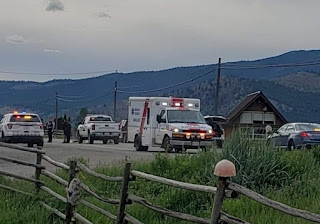 City News is reporting that "A child, believed to be under the age of 12, and an adult have been seriously hurt after a dramatic police chase and shootout involving the RCMP in Merritt, according to B.C.’s police watchdog. The events unfolded Sunday at around 3:50 p.m. when Mounties tried to stop a white Ford F350 and trailer, which were believed to have been stolen. Both the child and adult were inside the vehicle." Why did an adult have a child with them in a stolen vehicle?

“The vehicle reportedly did not stop,” the Independent Investigations Office (IIO) of B.C. says. A short while later, at around 5:30 p.m., the IIO says police once again spotted the vehicle, this time on Highway 5 and without its trailer. “Police deployed a spike belt and eventually the vehicle stopped, but then continued travelling again before coming to a stop on Highway 8 near Snake Road and Highway 97C,” the RCMP says."

"Mounties say gunshots were fired or exchanged between the suspect vehicle and officers throughout the incident. Both the child and adult were taken to the hospital with serious injuries. The extent of those injuries is unclear at this time. Investigators say no one else was hurt."

"Gunshots were fired or exchanged between the suspect vehicle and officers throughout the incident." Fired or exchanged? Which is it? If someone is shooting at the police that is freaking serious. If the police are shooting at a vehicle, that's probably gonna want to make him run more. He should have stopped. I'm not disputing that. It just very sad a child was involved. They had no way of knowing a child was in the car. It's just very tragic.