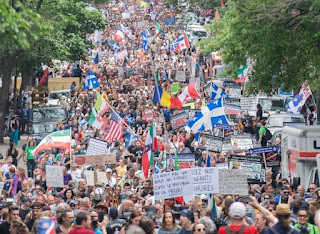 "Even though the city will move to an orange zone on Monday, meaning that gyms and indoor dining will reopen, people came out to denounce government restrictions and public health measures. One protester carried a sign which read make freedom legal again."

"Another sported the message 'my body, my choice.' Many protesters had different reasons for joining in the march. René Lajoie told CBC that he was there as a parent: I want my kids to be able to take their masks off at school." Children are NOT affected by Covid like ailing seniors.

I'm amazed CBC even reported it. They have been actively involved in reporting false numbers throughout the lockdown in support of the far-left agenda. Contrary to the longstanding French tradition of liberté, égalité, fraternité.

CBC and Post Media News have been lying about the numbers all along. Dr Vernon Coleman pointed out that during the Covid pandemic, cases and fatalities from the flu have vanished.

Dr. Hodkinson pointed out that during Covid, deaths from cancer and heart disease fell dramatically which proves those deaths were falsely attributed to Covid to maintain a false sense of hysteria. We were told that over 10,000 seniors died in care homes of Covid yet the same number of seniors died this year as last year and the year before. They lied.

Canada Health Alliance proclaimed that the PCR test is worthless to which the Portugal courts agreed. That court declared the PCR test worthless and lockdowns based on that test ilegal.

The results coming in from the States that have opened made the continuation of their lies statistically impossible. It's time for this ridiculous fraud to come to an end once and for all.

Dr Simone Gold said that stopping Covid with a mask was like stopping a mosquito with a chain link fence. The fake fact checkers funded by the Communist Party of China said that was untrue but Fauci's emails admit it is. His foundation funded the research on bats at the Wuhan lab.