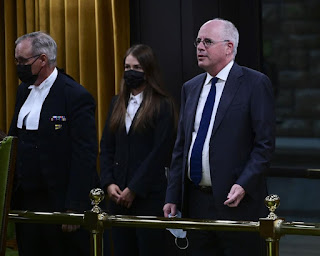 News Concerns is reporting that "The president of the Public Health Agency of Canada (PHAC) was publicly admonished in the House of Commons on Monday for failing to provide further details about the firing of two scientists at Canada’s highest security lab."

"In a rare procedural move, PHAC president Iain Stewart was escorted to the bar in the House of Commons chamber where he was reprimanded by the speaker for failing to turnover unredacted documents to a committee explaining why scientists Xiangguo Qiu and her husband, Keding Cheng, were removed from Winnipeg’s National Microbiology Laboratory in July 2019 and then later fired by the agency."

"Opposition parties joined forces last week to pass a Conservative-backed motion finding PHAC in contempt of Parliament. As part of the motion, Stewart was ordered to bring the documents with him, but he showed up empty-handed Monday."

Scolded? Put the POS in jail. He has a legal obligation to hand over those documents.

He's saying he can't hand it over because it's under police investigation. BULLSH*T!

Have the RCMP hand over the documents or is the RCMP not publicly accountable?

Posted by Dennis Watson at 2:54 PM