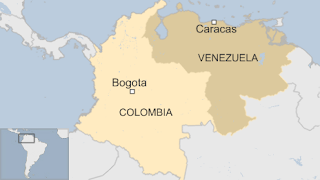 June 15th Reuters reported that "A car bomb explosion at a military base in the Colombian border city of Cucuta injured 36 people on Tuesday, the defense minister said, casting blame for the attack on leftist rebels. The explosion took place at a base used by the 30th Army Brigade in the northeastern city near the border with Venezuela." Turns out it was a fasle flag.

This comes as no surprise given the fact that the previous president of Colombia is on trial for an era of false positives where the military killed innocent civilians and dressed them up as rebels. Colombia is one of the most corrupt governments in the world right up there with Mexico and in both cases, the CIA is at the root of it just like in Venezuala.

The mission to destabilize the government in Venezuela had the same motive as the mission to destabilize the government in Mexico. The CIA wanted to overthrow the nationalization of their oil. Mexico was a complete sucess. Venezuela is a work in progress. The purpose of the new false flag attacks in Colombia near the Venezuela border are to justify an invasion just like Operation Northwoods. I'm not saying that Communism is good. I'm saying two wrongs don't make a right.

US Secretary of State Mike Pompeo said the West Point motto was "You will not lie, cheat or steal or tolerate those that do." Yet he admitted that when he was the director of the CIA, that's all they did. I do not support the CIA's mission in Venezuela just like I did not support their mission in Libya. Norway has nationalized oil. That is a good thing. That's not to say I support Communism because I don't. I support the West Point motto. The CIA does not.

Right now, Colombia is a mess. The corrupt president who is in league with the former president who was responsible for all the false positives, raised taxes during the pandemic. That was not a smart thing to do. Neither was calling a general strike. I broke the news about ESMAD shooting protesters with live ammunition. That was heinous. Yet blocking roads is not a civic right.

When the government backed down on the tax hike, the road blocks should have come down. Two wrongs don't make a right. Now we're in a toxic mess. The people are outraged ESMAD are shooting civilians so they keep protesting which means ESMAD keeps shooting civilians. The violence needs to stop. Both sides need to respect the sanctity of life. I talk about the serenity prayer. I believe in it. Some things we can change and some things we can't.

ESMAD does not have the right to shoot civilians. The people have every right to be upset about that. Yet the roadblocks need to come down. We all know 9/11 was a false flag. We're not blocking roads about it. We all know the last US election was full of election fraud. We're not blocking roads over it. Some things we can change, some things we can't.

Sometimes we just record our dissent and move on. Time is on the side of truth. In time truth will prevail. Justice doesn't happen at the snap of a finger. Justice is earned through persistence and patience. The UN has their own agenda. They might well be nice as pie in their field hospitals, yet the leaders of the UN are just as bad as ESMAD. Globalism is Communism. Under that system no one has any rights at all. Defunding the polcie is insane. We need to support law and order.