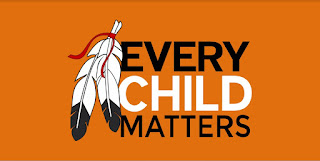 When CBC reported that "The federal government is set to release its action plan today in response to the National Inquiry into Missing and Murdered Indigenous Women and Girls' findings and its numerous recommendations. It marks two years since the inquiry released its final report after gathering testimonies from families and survivors across the country," I was somewhat skeptical. Wally Oppal's sabotaging of the first missing women's inquiry was outrageous. Then the high jacking of the second inquiry was equally as outrageous.

Yet Justin Trudeau said two things that made sense. Many other things that didn't make sense but two of the things he said were on point. The first thing he said is that the Catholic church needs to accept responsibility for their role in the Residential school disaster. That they have. So we need to stop blaming John A MacDonald and Egerton Ryerson. Justin Trudeau claims to be Catholic. Do I blame him for the Catholic residential schools? No, I do not. We all need to take responsibility for what we do and stop blaming everyone else.

The other thing he said that made sense was the pledge that the federal governement increase funding to stop human trafficking in order to help Indigenous women facing gender-based violence. That statement nailed it and brings us directly back to the failure of the second missing woman's inquiry that was hijacked by political extremists.

In that second inquiry Marilyn Poitras resigned from that commission because she felt it was not addressing the real problem, the elephant in the room. She said "We've been down this road before... We had people tell us if you want to know who the problems are and how to fix them you go talk to the sex trade workers. They're going to tell you who they are. It's not a mystery. This isn't some person coming out of the blue and randomly taking women off the street. People know who they're threatened by. Lets go talk to them. We weren't doing any of those things."

The second inquiry didn't want to address the problem. They wanted to promote an extreme political agenda. They wanted to exploit the missing and murdered women not help them.

Marilyn Poitras said "if you want to know who the problems are and how to fix them you go talk to the sex trade workers. They're going to tell you who they are. It's not a mystery. This isn't some person coming out of the blue and randomly taking women off the street. People know who they're threatened by. Let's go talk to them." What does that tell you? Everything.

Instead of doing that, the second inquiry just wanted to push the alphabet soup. As I previously said, I have no problem whatsoever with the term LGBT. I can say it, I can remember it and I can understand it. When you keep adding more and more crazy letters to that anacronym it becomes too much to swallow. It started off innocent. It added girls to women.

OK Women means female so girls are included in that. Then they throw in all this nonbinary, two spirit, bla, bla, bla. It takes something clear and concise and creates mass confusion.

The first missing women's inquiry was exactly that - missing women. It was a response to the Robert Pickton farm where many women were murdered. Not all were indigenous but many were sex trade workers. The failure of the second inquiry brings us to the Dianne Rock story. Dianne Rock was gang raped on the Pickton farm. Being gang raped implicates more than one suspect.

Those sex trade workers were being killed for drug debts. That is what we need to face.

Today I saw a first nations woman at the store wearing a shirt that said Every Child Matters with several eagle feathers on it. It wasn't orange and the logo was slightly different, but the message was profound. Every child does matter. Black, white, red, yellow or brown. They all matter.

Every Child who died at that Catholic residential school in Kamloops matters. Yet in Boston, Ireland and many other countries, a lot of boys were sexually assaulted at Catholic residential schools. They matter too. Do we add a B for Boys to MMIWG? No, we do not. We simply say every child matters because they do. Our children matter now. We still need to protect them.

We need to examine the Dianne Rock story, the Ashley Machiskinic story and the Janice Shore story becasue they are all connected. All three of those stories can be found on the Finian's Inferno website. What consenting adults do behind closed doors is their business. The key words are consenting adults. However, when a drug dealer takes all the money a sex trade worker makes after she gets goes on a date, that is not prostitution. That is human trafficking.