Last Friday was the opening ceremony for the European soccer finals. They are all palying in stadiums full of fans. Sportsnet is reporitng that a Greenpeace protester parachuted into the stadium before France’s game against Germany at the European Championship today. It doesn't look like he was wearing a mask.

Canada leads the world in pandemic debt and pandemic stupidity. We have the highest vaccination rates and the most restrictions in the world. Use your brain and do the math. The media is lying. Canada has fallen behind the rest of the world in common sense.

Can't believe I just caught this on video. Parachuted into the stadium, got caught in the spider cam and nearly crashed into the crowd. Hope he's ok! #GERFRA #EURO2020 pic.twitter.com/PJ49WYdFM9 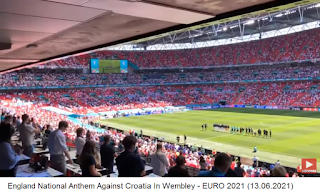 Posted by Dennis Watson at 1:50 PM