Post Media Trash is reporting that "A Canadian woman was released from a camp for ISIS detainees in northeast Syria on the weekend, a lawyer representing her family said on Monday." ISIS? GMAFB. The prison camp is for people who support Assad. 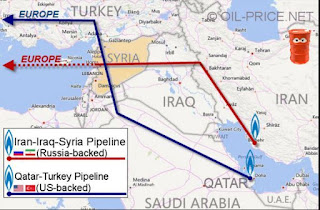 The CIA created ISIS to gain public support for Saudi Arabia's pipeline war in Syria. That is why the US has been arming ISIS. To oppose the pipeline from Iran and promote the pipeline from Quatar. Hillary Clinton was arming ISIS through Quatar. Yves Chandelon, the Chief Auditor for NATO, was found dead of a suspicious suicide right after he had discovered that the US was supotrting ISIS. That's why the CIA killed the Iranian genral responsible for defeating ISIS.

Look at what the US is doing in #Iraq & #Syria. They’re taking revenge on Hashd al-Sha’bi for defeating ISIS.
Since #Hashd crippled & destroyed ISIS -which the US had created- they’re taking revenge. The Iranian govt & nation & I strongly condemn the US’s malice.

Posted by Dennis Watson at 8:40 AM