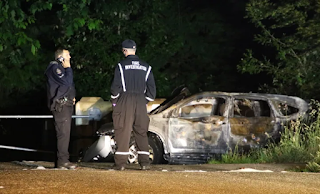 City News is reporitng that "Vancouver Police say a 44-year-old man died after shots were fired near a scenic and usually busy park in the River District Friday night. Police responded to calls of shots fired around 10:00 p.m. near Kent Avenue and Kerr Street. Alvis Anjesh Singh was found dead in his vehicle. A silver SUV with a sunroof was seen driving away east on Kent Avenue shortly after shots were heard. Police confirm a burnt-out SUV was found by J W Sexsmith Elementary School near West 59th Avenue and Ontario Street a few minutes later."

May 2000 Alvis was charged with drug trafficking.

Posted by Dennis Watson at 2:11 PM