Suminder Grewal aka Ali was shot dead in Surrey on July 31st 2020. He was a full patch Hells Angel from the new Hardside chapter. The shooters, Calvin Powery-Hooker and Nathan De Jong were sent here from Edmonton, where the Brother's Keepers got their gang tats from.

On September 23rd 2020, the crown issued a Stay of Proceedings meaning the matter was stopped. It didn't say ordered to stand trial in surpeme court, it said stay of proceedings which usually ends the matter until further notice. 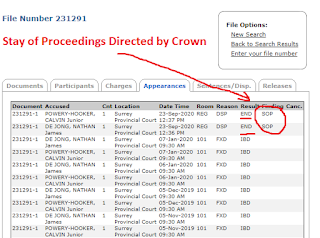 486 covers the identity of witnesses or undercover officers. 648 covers information about any portion of a jury trial which takes place in the absence of the jury which is pretty much a given. T-VD means Trial Voir Dire. There is no jury present so this is just the Voir Dire. A trial before the trial to determine what evidence is admissible. I'm glad it's proceeding.

The new Hardside chapter wasn't a real chapter like the others. They were more like a puppet club with a HA patch in a rental. They answered to Haney. Ali had the respect of the Brother's Keepers but Edmonton got the drug profits. Hardside got some finger puppets in Fort Langley. Obviously Ali wanted some of the profits from the Brother's Keepers since he did all the work so when Dr Spin said he and Chad owed money, they likely meant he kept what was rightfully his when Edmonton wanted it so they capped him. It's all about the money. It always is.