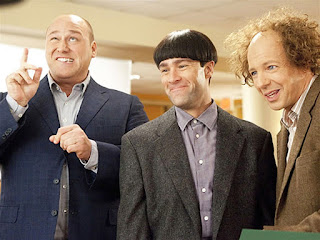 Larry Amero's murder trial is under way. The jury has been selected, the Voir Dire has been completed and the trial has finally begun. Keith Fraser is covering it. I didn't even know that guy was still around. Gumby and his sidekicks are accused of planning and executing the murder of Sandip Duhre at the Sheraton Wall Centre in January 2012.

Robby Alkhalil is a drug dealer. He works for Larry Amero. He's the smartest of the three but then again, if you work for an idiot, how smart can you be? Robby's brother Khalil Alkhalil was shot dead in Surrey when he was 19 back in 2001. In 2003, Robby had another brother named Mahmoud who was shot dead in Vancouver when he was 19 at the Loft Six shooting.

In 2018 Nabil Alkhalil, the third of five brothers, was shot dead in Mexico. Robby doesn't have a good prognosis. None of them do. Gumby was shot in Kelowna with his buddy Jonathan Bacon back in 2011. Twice Dr Spin mentioned Larry Amero's paralyzed left arm but I don't know what's up with that. I just know after Damion Ryan got his filthy few patch in Greece for capping a Quebec member for Gumby, all their days are numbered. Michael de Abaitua-Schulde was a West Pont member shot dead in Mississauga. Dean Wiwchar is just a Surrey Jack.