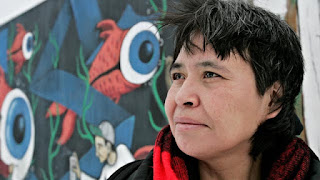 CBC is reporting on a leaked copy of the new report from the Missing and Murdered Indigenous Women and Girls inquiry and as expected it is another complete farce. From one extreme to the other without dealing with the real issue. It was not only Indigenous Women murdered on the Pickton farm. The whole spin is in itself divisive.

The wording of the report reavals the real political agenda of the inquiry. Rambling on about a Canadian genocide spurred by state actions and inactions rooted in colonialism and colonial ideologies. OMFG. These nutbars have a preconceived agenda and protecting women has nothing to do with it. It's like the anti Poverty committee who pretend to advocate for the poor when they are really advocating for Communism and Anarchism.

In Wally Oppal's Red Herring Inquiry as soon as the Hells Angels were mentioned, he shut down the inquiry and turned it into a less *adversarial* panel discussion where he could more easily censor key evidence. This inquiry never let the Hells Angels be mentioned because they had their own political agenda.

What about Wendy Margaret Carlic? She was murdered right before she was to testify at the new inquiry and her murder has been a complete cover up. Violence against indigenous women is real and needs to be addressed. Some of the violence against indigenous women happens on reservations. Much of it happens off the reservation. It does need to be addressed.

Instead of dealing with the Dianne Rock story and the Janice Shore murder or the Ashley Machiskinic murder, the extremists run off on a tangent about two-spirit, lesbian, gay, bisexual, transgender, queer, questioning, intersex and asexual indigenous women without including all women. GMAFB. The sacred hoop has four elements not just one.

The Finian Commission stands and Finian's Inferno has now been released. Deal with that.

Marilyn Poitras on why she resigned from the commission

"We've been down this road before... We had people tell us if you want to know who the problems are and how to fix them you go talk to the sex trade workers. They're going to tell you who they are. It's not a mystery. This isn't some person coming out of the blue and randomly taking women off the street. People know who they're threatened by. Lets go talk to them. We weren't doing any of those things."

Exactly. Ashley Machiskinic was pushed out the window for a drug debt. Everyone knows who her dealer was. Let's stop the charade and deal with the problem.

Director's resignation from MMIWG inquiry a sign of dysfunction