BC contracts out gang enforcement to Newfoundland 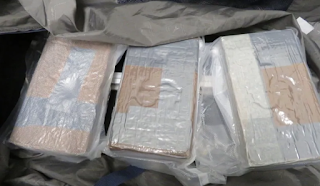 VOCM is reporting that "The RCMP’s Federal Serious and Organized Crime Unit (FSOC) launched an investigation last November 17th into the importation of a large quantity of illicit drugs from western Canada to St. John’s. On that same date, FSOC members stopped a vehicle in St. John’s in which they found three kilograms of nearly pure cocaine, 44 pounds of cannabis marijuana and an extendable baton. Their investigation pointed to John Peppin of Brentwood, B.C. A Canada-wide warrant was issued for him and he was arrested on Monday with the help of police from Victoria, B.C." 3 kilos of cocaine in NL that came from BC.

Well that is somewhat amusing. Since the BC Gang Task Farce is so compromised and completely useless, we have to rely on the Alberta and Newfoundland task forces to arrest our criminals. Police corruption in B.C. is clearly spreading drugs right across the country.