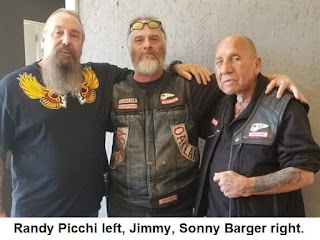 The Los Angeles Times is reporting that "Four Modesto residents, including the president of the city’s Hells Angels Motorcycle Club, are facing federal conspiracy charges after prosecutors say they were part of a trafficking ring that sold methamphetamine. Randy Picchi, 61; Tina Picchi, 51; Michael Mize, 61; and Michael Pack, 32, are charged with conspiracy to distribute and possess with intent to distribute methamphetamine, the U.S. attorney’s office said in a release. Randy Picchi, Tina Picchi and Mize were arrested Tuesday and will appear in federal court in Fresno on Wednesday. It was not immediately clear whether Pack was in custody.

"Randy Picchi, the president of the Modesto Hells Angels, is accused of leading a drug conspiracy and directing his wife, Tina Picchi, to regularly deliver drugs to Mize and others across Northern California. She was stopped by law enforcement and found with approximately 4 ounces of methamphetamine, authorities said. Prosecutors say Picchi used Pack, a prospect with the Hells Angels club, to help obtain methamphetamine on at least one occasion. Pack was found with 499 grams of meth in his possession during a traffic stop, authorities said."

Another crystal meth dealer posing with Sonny Barger. The Aging Rebel posted wire tap transcripts. The FBI is leading the federal investigation and they were assisted by the ATF and the Modesto Police Department who were seen during the raid. Since the ATF were caught in Operation Fast and Furious, their integrity has been in question. The FBI must not have included them in the investigation or at least included them just enough to not be implicated in the bust.