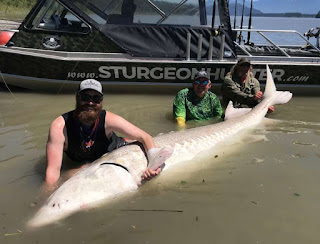 Global is reporting that "Three Calgary fishermen are coming back from their fishing trip to B.C. with some humongous bragging rights. The trio snagged an 11-foot sturgeon from the Fraser River near Chilliwack while on an expedition led by the company SturgeonHunter Tuesday. The fish, which was measured at 62 inches, or one-and-a-half metres in girth, is estimated to be 800 pounds in weight and 100 years old. The sturgeon won’t be travelling back home with its captors, however. After snapping some photos, the group released the fish back to the river.

Catch and release. I didn't think you were allowed to catch sturgeon. 100 years old means it takes a considerable amount of time for them to get that big. It wouldn't take long for them to become extinct if they weren't protected. I remember hearing a lady from the Fort Langley canoe club claim she saw one come to the surface while they were practicing.