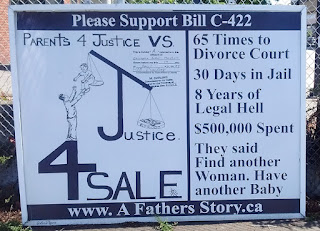 Speaking of judicial injustice, I met a father today named Chris Marshall who had quite a story to tell. His story is about a father trying to get access to his child during a divorce and how he was completely screwed over by the Canadian judicial system. It reminds me of the John Carten story. I'm not a lawyer, I'm an advocate. Consequently I'm a hopeless romantic.

I always walk around with an ace up my sleeve and play it whenever my back is up against the wall in court. It's called Natural Justice. The intent of the law speaks to natural justice. That's why it's called the judicial system. It's *supposed* to uphold justice. Yet it rarely does. That's why I'm a dreamer. I play that card saying the court is supposed to uphold justice and this is not just.

Have a look at what Chris Marshall has to say. He has his own website called A Father's Story.

This is a PDF File of his story: Dead Beat Dad or dead Beat Justice System.