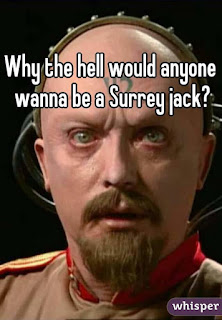 Global is reporting that "A traffic stop in Surrey late Friday night turned wild after an RCMP cruiser was briefly stolen, prompting a massive police response. Just after 11:30 p.m., a Surrey RCMP officer followed an erratic driver into an underground parkade at King George Blvd. near 100th Avenue. The two occupants of the vehicle were initially co-operative with the officer, before bolting on foot. While the officer gave chase to the driver, the passenger hopped into the police cruiser and sped off, driving up the ramp and crashing through a secure gate to freedom."

"Freedom didn't last long, though... A massive police response including cars, Air 1 and police dogs soon descended on the scene. Police found the stolen police vehicle several hundred yards away, and arrested a suspect found nearby. He's being held in custody on an outstanding arrest warrant. Police are still seeking the second suspect." Surrey Jacks yo - not very smart.