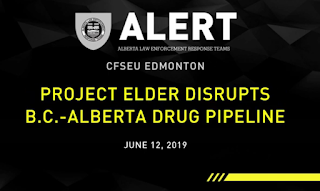 Finally, BC contracts out it's gang enforcement to the Alberta Law Enforcement Team. At least they are still involved in Law enforcement unlike the completely compromised and completely useless BC Gang Task Farce.

CBC is reporting that "ALERT cuts off $2M 'drug pipeline' operating between B.C. and Alberta."

"Twelve suspects have been arrested after a two-year police investigation into a drug pipeline between British Columbia and Alberta. Fifty-nine charges have been laid against the suspects and more than $2 million in drugs and cash was seized, the Alberta Law Enforcement Response Teams (ALERT) reported Wednesday."

"Project Elder was an ALERT Edmonton investigation into interprovincial wholesale drug distribution. ALERT alleges that a high volume of drugs was being shipped to Alberta involving a complex scheme that included vehicles equipped with hidden compartments. The cash proceeds of crime totaled $514,335 and the seizure included:"

"9.3 kilograms of cocaine, 6 kilograms of methamphetamine, 684 grams of fentanyl powder, 17.2 kilograms of a cocaine buffing agent, and a .40-calibre handgun with suppressor and expanded magazine." That is significant.

This is what the BC Gang Task force is *supposed* to do but doesn't. Instead of stopping crime and drugs they just want to profit from it. That is unethical. We need to fire them and hire ALERT. 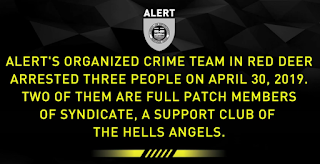 May 6th ALERT reported that in project Rocker ALERT arrested three Hells Angels associates for drug trafficking in Red Deer. Two of whom are full patch members of the Syndicate. Items seized include 3 kilos of cocaine and 9 kilos of a cocaine buffing agent.

Alberta arrests Hells Angels and their associates for selling drugs. So does Newfoundland, New Brunswick and Nova Scotia but BC does not. It doesn't take a brain surgeon to do the math and figure out who the real criminals in BC are. The BC Gang Task Force is on the wrong side.