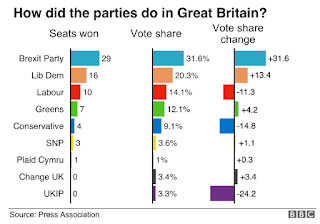 The Guardian is reporting that "Nigel Farage’s Brexit party has surged into first place as voters’ favourites, according to a new poll. It is the first time the party has achieved top position in a national poll. The results suggest hundreds of Conservative seats are at risk."

"The Brexit party’s support increased by two points to 26% of the vote in the latest Opinium poll – for the Observer – which asked people how they would vote in the next Westminster election. Labour is in second place on 22%, but its support has fallen by seven points over the past two weeks. The Tories are third on 17%, with their support down five points, and the Lib Dems are up five points, on 16% of the vote."

The BBC is reporting that "the Brexit Party swept across Britain, and the Liberal Democrats and Green Party also made gains." Finally common sense prevails in the UK.

Posted by Dennis Watson at 5:45 AM