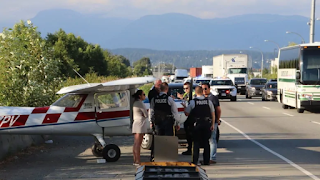 Global is reporting that "Highway 17 in Surrey became an unexpected landing strip after a small plane was forced to make an emergency landing Friday evening. The plane landed just before 6:45 p.m. on the side of the westbound lanes at Tannery Road, Surrey RCMP confirmed."

"Schlieck said the plane lost a fuel cap from one of its wings, causing the fuel in the wing tank to siphon into the air until none was left. The instructor quickly took control after the problem arose." Canadian Flight Centre president and CEO Peter Schlieck said "He did a perfect job, no one was harmed and there wasn't a scratch on the plane." Well done.

Posted by Dennis Watson at 7:36 AM