34 arrested at Hells Angels Euro Run in the UK 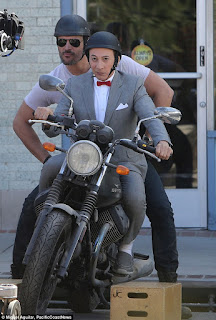 The Evening Standard is reporting that "More than 30 people have been arrested as thousands of Hells Angels bikers take part in a three-day event to mark the club's 50th anniversary in the UK. Surrey and Sussex Police said a total of 34 people had been detained on suspicion of drugs offences and possession of offensive weapons in connection to the Hells Angels Euro Run."

"Earlier this week, officers were granted powers to stop and search people within a designated area across Surrey and Sussex in a bid to tackle anti-social behaviour. Assistant Chief Constable of Surrey Police Nev Kemp, who is leading policing operations across both counties this week, said: "We have been very clear with those attending the Hells Angels event, many from overseas, that we will not tolerate criminal and anti-social behaviour. Our activity over the last few days has been about keeping people safe, which is why I put the Section 60 order in place."

What do they mean anti social behavior? They mean BS like when the Edmonton trash beat a father to death in Greece because he asked them to get off his bike so he could go home to his kids. If you allow high profile murders and mayhem at club events, the public will rebel against you. It's called a natural consequence of unacceptable behavior.

Posted by Dennis Watson at 9:57 AM