Blackwater mercenaries for hire in Venezuela 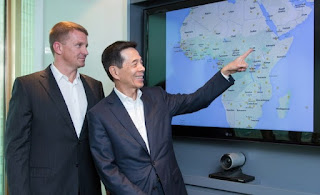 The New York Intelligencer is reporting that "A decade ago, the Iraqi government banned Blackwater Security from operating in the country after its mercenary fighters killed 17 civilians in Baghdad’s Nisour Square. That might dissuade some from meddling in conflicts overseas, but Blackwater founder Erik Prince is nothing if not committed to his profit margins."

"On Tuesday, Reuters reported that Prince — who no longer has a professional connection to Blackwater — has a new business plan. He’d like to send mercenary fighters to Venezuela, where they would help depose the country’s sitting president, Nicolás Maduro. Prince met recently with influential supporters of President Trump and “wealthy Venezuelan exiles” to pitch his plan to ship out as many as 5,000 mercenaries to aid opposition leader Juan Guaidó, according to Reuters." He no longer has ties to Blackwater because they changed the name.

The problem with the proposal is that Erik Prince is a sleazebag. One minute he is trying to con us into supporting a modern crusade against Islam. Then, as soon as he gets accused of arms dealing and murdering whistleblowers, he runs off to the United Arab Emirates and creates a mercenary army for the Muslims. I call it mercenary because that is exactly what it is. An army for hire without morals. More recently he's formed a mercenary army for communist China.

Right now the Prince of Darkness is proposing he send in mercenaries to help topple the socialist government in Venezuela. What if they say no? Does that mean he will send mercenaries in to crush the rebellion and support the socialist president? After all, he is supporting Communist China and his army is for hire. How about we just hang the traitor for treason instead?