A tonne of cocaine seized off the coast of Portugal 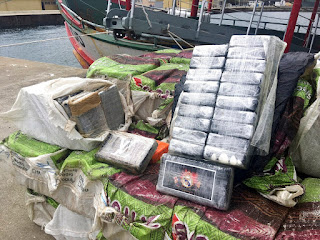 Reuters is reporting that "Police seized over a tonne of cocaine worth some $49 million and arrested seven people aboard a Brazilian fishing boat in a drug bust on the high seas off Portugal backed up by international crime agencies, officials said on Tuesday. Portuguese police discovered 50 cloth sacks full of cocaine, apparently destined for the continental European market, inside a specially designed, hard-to-access compartment of the fishing vessel, a police statement said. The suspects arrested were all foreign nationals aged between 36 and 64, it added. Codenamed “White Sand”, the anti-drug operation began following an exchange of information between Portuguese and Brazilian authorities, and was assisted by the U.S. Drug Enforcement Administration and Britain’s National Crime Agency."

New gangs were muscling into the CIA's cocaine market so the DEA were quick to stop them.