Another gang murder in Saskatoon 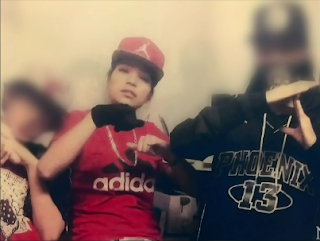 Global is reporting that "A Saskatoon judge lifted the publication ban on Leya Paul’s identity and sentenced her to nine years in prison for killing Patrick Dong."

"In October 2016, two months shy of her 18th birthday, Paul was with a group who drove Patrick Dong to an isolated area outside of Saskatoon. Under evening darkness, he was beaten with a crowbar and a bat. Dong ran away for roughly one kilometre before Paul delivered six fatal stab wounds. The victim was left for dead on the side of the rural road. “The death arose as a result of a frenzy that was no doubt fueled by the fact that the participants had been taking methamphetamine and alcohol,” Smith wrote in his decision."

"Court heard how Paul is a gang member. Based on a pre-sentence report and psychological assessment, she is at a high-risk to reoffend and reoffend violently."

A gang member. What gang? The Terror Squad is tied to the Hells Angels. A high risk to reoffend. What is wrong with these people? No respect for the sanctity of life. That means you're a f*ck up. Society does not respect you.

Crystal meth is bad. That's why we should strive to reduce the amount sold on the street. When we do that we also reduce crime. Saskatoon has a huge problem with gang violence and it's all related to the drug trade. Helping people stay addicted feeds the violence and supports organized crime. It's time to try a new approach. Enforcement is one of the four pillars.

"The four-pillar approach deals with people who have an addiction and need treatment, while clearly stating public disorder, including the open drug scene, must be stopped. In short, addiction needs treatment and criminal behaviour needs enforcement."