4 shot at Raptors rally in Toronto 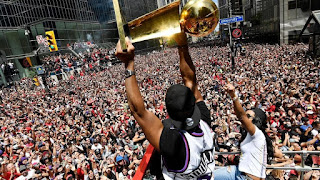 CBC is reporting that "Four people were shot at a rally celebrating the Toronto Raptors' first NBA championship on Monday afternoon, according to police, amid a celebration that saw thousands of fans crowd into the city's downtown core. Police took three people into custody and recovered two firearms, Toronto Police Chief Mark Saunders told reporters. Two people were arrested in connection with one shooting, Saunders said, while the third was arrested in connection with the other. He did not go into further details."

"The shootings happened around 3:45 p.m. ET, at Bay and Albert streets — near city hall and Nathan Phillips Square where a rally capping off a victory parade was coming to a close. The four victims suffered non life-threatening injuries and the arrests were done incredibly quickly, Saunders said." AYFKM? This was a very happy event. WTF?