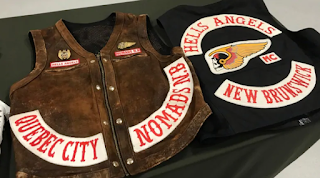 CTV is reporting that "A 59-year-old man is going to prison for his role in a drug-trafficking ring in northern New Brunswick. Daniel Duguay, of Saint-Irénée-et-Alderwood, N.B., has been sentenced to two years in prison, in connection with drug trafficking on the Acadian Peninsula and in Restigouche, Madawaska and Victoria counties. Police say the investigation into cocaine trade started in November of 2016."

“Over the course of the investigation police seized approximately $900,000 in cash and approximately 5.5 kilograms of cocaine,” the RCMP said in a news release. “Investigators determined that the drugs were linked back to the Hells Angels Motorcycle Club in Québec.”

In February CBC reported that "Police say they've dismantled a major drug network that allegedly controlled most of the cocaine and meth sales in New Brunswick and eastern Quebec. Investigators allege two brothers managed the territory on behalf of the Hells Angels' Nomads chapter in New Brunswick, collecting a tax from dealers who want to sell cocaine or meth in the area.

"The Red Devils are the top support club for the Hells Angels in New Brunswick. All of the alleged Red Devils members who were arrested played key roles in the network, according to Lapointe, ranging from sub-managers of the territory to "working to obtain the cocaine that would be sold."