Federal government commits to cost-sharing with Surrey on policing transition 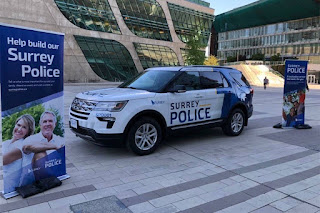 The Surrey Now Leader is reporting that Federal Minister of Public Safety Ralph Goodale has penned a letter to Surrey Mayor Doug McCallum saying that the federal government commits to cost-sharing appropriate expenses related to the transition at the applicable cost-share ratio as set out in B.C.’s Municipal Police Service Agreement.

That's actually a good point. B.C.’s Municipal Police Service Agreement already exists. It permits the province to sub-contract the RCMP provincial force to municipalities. Municipalities with populations of 15,000 or more pay 90 percent of the cost base described in the policing agreements. The federal government pays the remaining 10 percent.

The concern arises from transition costs. The RCMP are trying to sabotage the process. Obviously, if a police station exists in Surrey it is owned by the federal government. Making Surrey taxpayers pay twice for the land the current police stations reside on would be grossly unfair since they have already been paid for with our tax dollars. That would be like tolling a bridge after it's already paid for. The same with the cost of existing police cars.

Surrey is the largest city in Canada that does not have a municipal police force. It's time to get with the program. We need to evole and confront the organized crime the RCMP refuse to.

We need to confront crime not tax it.

BTW the Surrey Now Leader is reporting that Jim Cessford says he’d be Surrey’s new police chief at the drop of a dime. IE in a heartbeat. Cessford was Delta’s chief constable for 22 years before he retired in 2015. Doesn't look like the sky is falling to me. Linda Hepner is an IDIOT.