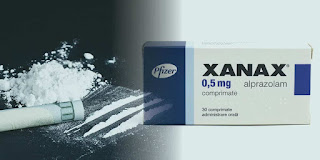 CBC is reporting that "Laval police initiated a series of raids Tuesday morning aimed at taking down a synthetic drug ring. About 235 police officers from across the province have been searching 13 locations in Laval and Montreal, as well as North Shore communities such as Terrebonne, Saint-Lin-Laurentides, Boisbriand, Saint-Eustache and Saint-Jérôme.

Police say the raids are linked to the Hells Angels. Eleven people have been arrested so far, and police have seized cocaine, cannabis, methamphetamines, cash and weapons, said Sgt. Geneviève Major. The operation is part of an investigation that started in February 2018 when the Canada Border Services Agency intercepted 200 packages containing Xanax. The return addresses on the packages were post office boxes in Laval.

Cocaine with Xanax - that's what they had Caitlin on. Simon and Christian Davidson, the sons of disgraced former Montreal police officer Ian Davidson in Laval were busted in a cocaine and Xanax drug ring back in 2015. This new bust is an offshoot of that one.

If the police arrest Hells Angels associates for selling Cocaine with Xanax in Laval, why won't they do it in Kelowna? What makes BC so corrupt?