I had heard the Fake Stream Media was reporting that Twitter banned Donald Trump and the Team Trump twitter accounts and it didn't surprise me. What surprises me is the reason why. Twitter claims that it was because Trump was inciting violence which is difficult to believe. All the massive Trump rallies in Washington and everywhere else have been completely nonviolent. Unlike Justin Trudeau and the Democrat leaders in the West, Donald Trump swiftly renounced any violence and asked people to go home after the protest turned violent. He never made a post inciting violence. Ever. So what post did he make that got him banned? Wait 'till I tell ye.

I have no doubt a group of Trump supporters stormed the Capital building. As I previously said, storming an office to occupy it is a common, nonviolent form of protest.

The BBC posted a picture of QAnon quack Jake Angeli attending the demonstration. It totally falls within the realm of believability that some QAnon guys showed up at the protest. It's also possible agent provocateurs where placed there as often happens in any protest.

TBM sent in a couple of interesting pictures sources sent them. Check it out. This is the same picture of Jake Angel standing in front of a green screen. We know what a green screen is.

We saw it in Sandy Hook. Anderson Cooper used one. I'm not saying Sandy Hook never happened. I'm saying Anderson Cooper used a green screen to pretend he was onsite interviewing a witness at the funeral when he wasn't. It wasn't a big deal but that was when we learned what green screens are and what they're used for. They're used in movie production to create a different background than is present when filming.

Maybe the green screen picture is fake, I don't know but it does present an interesting dilemma. What is Jake Angel doing knowingly standing in front of a green screen for a fake video?

It would kind of support my theory that Q who Anonymous claimed was Ezra Cohen-Watnick is CIA. I believe QAnon was a psyop to lead the movement astray. Trust the plan everyone. Not. Voter fraud was the plan. A big shout out to Anonymous BTW. All hail. Nobody likes Fascists. My grandfather had mustard gas burns on his back from the trenches fighting the Fascists. I am Anti Fascist. I am also Anti Communist because they are the same f*cking thing. 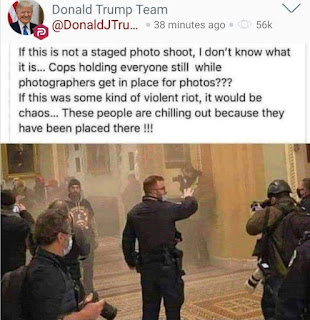 Trump's Team posted a picture of the Capital hill protest showing police stop the action for a cameraman to get into position. Yeah WTF is right. My point is, Donald Trump did NOT incite violence. That is not why he was banned from Twitter. It was an act of cencorship.

Facebook is also deleting conservative sites and just deleted the #Walk Away group. 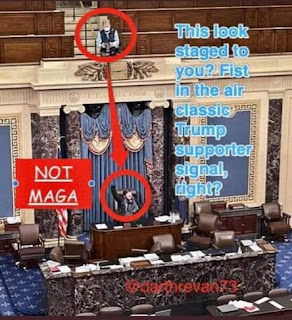 They ushered them through. From Jack Dawkins pic.twitter.com/qqLrcCxi1p

Capitol police open doors for the protestors. They stand aside and invite them inside. pic.twitter.com/OnSd3KGzz5

Remember this image during the BLM “demonstrations”? If they wanted to protect the capital building today they would have, it seems to me this is being allowed to happen! And knowing their modus operandi is order out of chaos this could get ugly, let’s hope not!#capitalbuilding pic.twitter.com/BQmZthvr4m