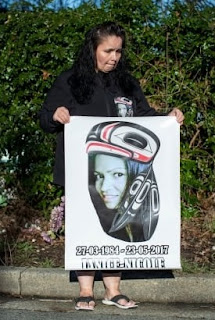 CBC is reporitng that "A grieving Vancouver mother has vowed to rebuild a shrine she maintained for years in her daughter's memory after it was removed without any notice. The shrine, near East 7th Avenue and St. Catherines Street in East Vancouver, was established near the spot where Marlene Thistle's daughter, Janice Nicole Bryant, 33, was shot and killed on May 23, 2017. Bryant's killer has not been found. "Someone took it upon themselves to remove the memorial, and dump it ... like it was garbage," said Thistle. "My daughter is not garbage."

Heavy sigh. There is no statute of limitation on grieving the loss of a son or daughter. This case is indeed heartbreaking. I was in the drum circle at her memorial. I was the one with the Irish drum. Same drum, different drumstick. It was a very spiritual experience. Janice's husband Glen Nelson was with the Redd Alert and took back all the drug dealers in the DTES for the Hells Angels. Glen had street cred. He became too powerful so the club hired Steele to kill his wife. Steele would not have been allowed to kill Glen's wife without the club's permission - 8151.

IHIT's not going to investigate it because they have Hells Angels associates in the witness protection program. Their entire unit is compromised. IHIT made some changes after they botched the Surrey Six investigation and I was hopeful. Now I am not and it ties in with the new news that is coming. The problem with a company man is that when the company becomes corrupt so does the company man. An evil tree cannot bring forth good fruit.

The BC Gang Task force is also compromised. When the Edmonton Hells Angels killed Ali in Surrey, the crown dropped the charges. The Redd Alert is also administered out of Edmonton just like the Brother's Keepers are. The Compromised BC Gang Task Force claims that if they help the Hells Angels obtain and maintain a monopoly on the drug trade, there will be less public violence. That is an offensive lie. Just aks Janice Bryant and Janice Shore.

The Hells Angels hired the brother's Keepers to bring violence to Surrey. Now they have hired the Driftwood Crips to bring more violence to Vancouver. The Hells Angels are the root of all the gang violence in Vancouver while IHIT and the BC Gang Task Force are helping them. I'd say shame on you but you obviously have no self-respect so I'll simply say I am ashamed of you. I believe in law enforcement but this is not it. The truth is a double edged sword.