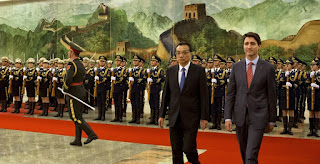 Cap for Canada is reporting that “The central banks of China and Canada have renewed a bilateral currency swap agreement, the People’s Bank of China (PBOC) has announced. The swap line has a size of 200 billion yuan (about 30.96 billion U.S. dollars), or 39.39 billion Canadian dollars. It will be valid for a five-year period and can be extended on mutual consent. Published on January 14th, 2021, the Chinese media source article states that the currency swap extension between the two central banks will help promote bilateral financial cooperation, expand the use of local currencies and facilitate trade and investment.”

The rest of us are left wonder what on earth is wrong with Jutin Trudeau? That guy has some serious mental problems. Parading around with a Communist Manifesto saying he admires the dictatorship of China that holds political prisoners and executes them to order to make money off their organs shows that he definitely needs professional help. We need to revisit the dream.

Justin Trudeau is no Nelson Mandella. Nelson Mandella protected civl liberty by law as did Jutin's father. The CCP are mass murders like Chairman Mao who destroy civl liberty under the ridiculous lie that you must give up individual rights to make way for collective rights. Once you give up individual rights there are no collective rights because no one has any rights.

Do we have a currency swap with the United States? Propping up an ali would be far more productive than propping up a Communist dictatorship active in its attempts to take over the world through their manipulation of the UN and the WHO. All of this reminds me of the Korean War. Justin Trudeau is on the wrong side. He was training Chinese op. That's kinda called treason.

This is why I call Justin Trudeau Commodus from the movie Gladiator. Marcus Aurelius knew his son was not a moral man. Maximus didn't want the power but his son Commodus lusted after it. There was no free republic in Commodus' mind. Commodus wanted the power of dictatorship because he had small man syndrome just like Justin Trudeau. If you want to nationalize your oil like Norway, have at it but that doesn't mean you have to turn all your citizens into slaves.