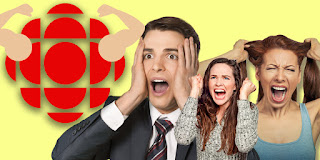 CBC is reporting that "The CBC was forced to defend its plans for branded content on its digital platforms Friday as the CRTC peppered senior executives of the public broadcaster with questions about the controversial decision at a broadcast licensing hearing Friday. CBC's new marketing division called Tandem, which creates branded campaign content for corporate clients, has sparked criticism, including denunciations, an open letter and a petition from a number of stakeholders, including former and current CBC journalists. They worry that the paid content blurs the lines between advertising and news and will erode the integrity of CBC journalism."

"Campaign content for corporate clients." Where have we heard that before? That's all the mainstream media does now. It's not news it's advertising. The CBC has every right to turn its conglomerate into a cheap corporate tabloid. They should call the whole thing Tandem and lose tax funding since it has indeed forsaken objective journalism.

The CBC lied about the Covid hospitalization rates. They didn't make an error, they lied. That used to be big news when a news agency knowingly lies. Now it is considered advertising for their corporate clients. The Tornto Star is reporting that "The CBC says it has been offering branded content for many years, as have other media outlets around the world.” Exactly. That is the root of the problem. Toronto dot com is reporting that "CBC personalities Carol Off, Mark Kelley, Nahlah Ayed and Jeannie Lee are among a growing number of staff urging the public broadcaster to drop efforts to sell more branded content." CBC is branded content.