Remembering the 2020 US election fraud 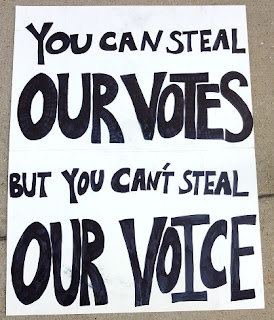 Before I post an overview of Donald Trump's term in office, I want to record my dissent and cement in our minds the lasting memory of the 2020 US election fraud because it has clearly diminished all of us. In the last municipal election here in Surrey, the local activist group known as Wake up Surrey sounded the alarm over voter fraud here and said "You can steal our votes but you can't steal our voice." Their concern was vote tapering with mail in votes so this is not new.

In the last US election Wisconsin had an abnormally high voter turnout. It was so abnormal it pointed to election fraud. The number of mail in ballots that went almost exclusively to Joe Biden also pointed to voter fraud. The way the vote was conducted was shady. They called all the obvious States but held back on counting the swing States. As the Hodge Twins pointed out it looked like they waited to see how many extra votes they needed to flip the election.

We saw the votes pulled out from under the table after they told the scrutineers to leave. That mother and daughter team were in a conflict of interest. Dominion voting is in a conflict of interest. Donating to Hilary Clinton and Justin Trudeau is not something an impartial voting software company is supposed to do. Sharing office space with George Soros shadow clubs is Orwellian.

So we trusted in the legal process. To be perfectly honest, I'm not sure what kind of legal recourse there is for voter fraud. You can nullify the election and hold it again but that is just as problematic if you have the same people redo it again.

The Texas lawsuit was problematic. Texas filed a lawsuit stating that other states violated the Constitution. The court said that may well be the case but one States doesn't have jurisdiction over another state. So the lawsuit was dismissed. Not because there was no evidence of voter fraud. There was plenty. It was dismissed over standing and jurisdiction.

I'm not sure why voters in the swing States could not file a new action complaining about the voter fraud in their own States. Yet filing a separate legal action for each State is also problematic. We have found legitimate concerns with electronic voting, mail in ballots and with Dominion Voting. That is what we have discovered.

Quacks R Us keep saying the Storm is coming, Trust the Plan. Donald Trump will still be your president. No he won't. It's a done deal. The lawsuit never went anywhere. The objection to the electoral votes didn't have a chance. Mike Pence already conceded. He had no alternative. It's a done deal. Dr Q is lying to you just like he has all along.

Voter Fraud was their plan. The storm of Conservative censorship is here. The Capital Hill false flag was a complete sucess. In Surrey they said you can steal our votes but you can't steal our voice. Yet that is exactly what Facebook and Twitter are trying to do. That is why people are leaving YouTube for Rumble and are leaving Facebook for Clouthub and MeWe.

So yes Joe Biden will be the next president but he cheated. We all know that just like George Bush did in Florida back in 2000. The globalists within the Democrat party are teaming up with the globalists in the Republican party to form one party, the Communist Party of China. That means the patriots in the Democrat party can team up with the patriots in the Republican party to form another party that supports the US Constitution and a free republic. Communism sucks.