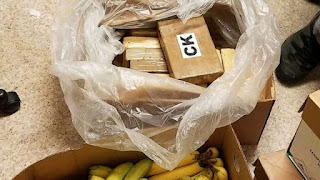 Colombia says "After a mix-up, Canadian authorities mistakenly sent a shipment of bananas full of cocaine that had been seized last Tuesday. Kelowna police indicated that 21 kilograms of the drug from Colombia were found in the shipment, which ended up in grocery stores in the country."

The Toronto Sun is reporting that "A dozen one-kilogram bricks were discovered mixed in with a box of bananas by workers at one grocery store then, later that day, nine other bricks were found with bananas at another shop." 21 kilos is a lot.

So whose mistake was it? Canadian authorities? The police seized the shipment then it was shipped to grocery stores by mistake. If they had half a brain they'd be dangerous. CTV is reporting that "When asked why the information was only coming to light two years later, the RCMP said it took Mounties and CBSA quite a while to trace the shipments to their source country, and to look into whether the intended receiver was in the area." That is shady.

The New York Post is reporting that "A botched drug-trafficking operation resulted in banana shipments stashed with cocaine being accidentally sent to Canadian grocery stores, authorities said." This happened February 2019 and we're just hearing about it now.

Google has buried me but Gangstersout.com still works and Duck Duck Go hasn't burried us.