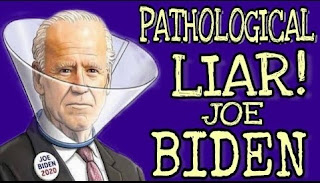 Rebel News is reporting on president elect Joe Biden's recent pledge to defeat the NRA and I just chalk it up to yet another bold faced lie. Joe Biden is not a moral man. During the election a NRA supporter challenged him and said you want to take away our guns. Joe did what Joe does and boldly called him a liar. Yet that is exactly what he has just announced he wants to do.

Gun control is what a Communist government does before it starts killing people. I do not support gun control. I support the Swiss model where target shooting is a national sport.

Steven Seagal said he believes that many of the mass shootings are orchestrated. I also believe that. Not all of them, some of them. There were too many rounds fired in the Orlando shooting for it to be just one person. There was no motive in the Nova Scotia mass shooting. Gun control was the only motive in that one. Crimes without a motive are suspicious. Operation Northwoods was real. The attack on the USS Liberty did happen. We need to face that.

This isn't the first time Uncle Joe was caught in a bold faced lie. When he was vice president under the Obama administration, he promised that they would not raise taxes on the middle class after they raised taxes on the rich. Then shortly thereafter he broke that promise.