Anniversary of China's persecution of the Falun Gong 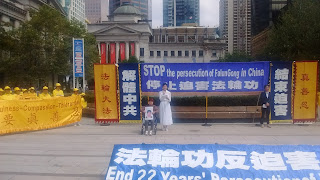 I attended a rally today at the Vancouver Art Gallery commemorating the 22nd anniversary of the Communist Party of China's persecution of the Falun Gong in China. It was nice to see their marching band back. One mother made a call for her daughter Yang Jinya to be released from prison and one daughter made a call for her mother Tang Huafeng to be released from Prison. Both are political prisoners in China who were imprisoned for their religious beliefs.

I spoke with one practitioner who said many people here in Canada think Communism and Socialism is good. We are here to say no it's not. We have suffered greatly in China under Communism. Communism will take all your freedoms away.

I spoke with another practitioner who met with Justin Trudeau's Minister of Defence about another pollical prisoner in China. He wouldn't do anything about it and simply forwarded their letter to someone else. The Federal liberals are criminally culpable in the Communist atrocities in China. On the recent declaration about the Uighur genocide in China, Justin Trudeau abstained from voting. That's because he supports Communism and all the atrocities that go with it.