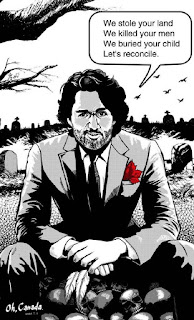 As I previously said, Communist China pretending to support aboriginal rights is an absurd lie. The Palestinians are Muslim and Christian. The CCP is exterminating both in China. The Uyghurs and the Tibetans are aboriginals and the CCP is brutally oppressing them as we speak.

Amidst this modern-day genocide, the CCP is pointing the finger and magnifying their false acuations. The National Post is reporting that the CCP's State run newspaper recently posted a cartoon of Justin Trudeau sitting on a pile of indigenous skulls saying we stole your land, we killed your men, we burried your children. This is offensive and dishonest.

The CCP put Aboriginals in jail and execute them to order for their organs. Canada does not and has not done that. Ever. This is a perfect example of how Communism likes to rewrite history. When the French and English came to Canada, they traded with the local natives and made treaties with them. In contrast, the Spanish just slaughtered the locals in Central America.

The Aboriginals in North America were not a single nation living in peace and harmony when the French and English came here. At that time, the Aboriginals practiced slavery. The Natives in Fort Langley befriended the English settlers because they protected them from rival tribes who would raid them and carry them away as slaves. "The Coast Salish held slaves as simple property and not as members of the tribe. The children of slaves were born into slavery." 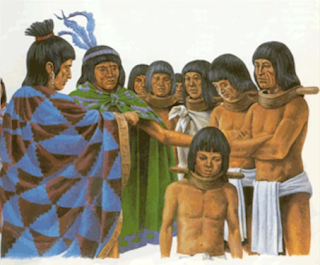 A few years ago, I met a hereditary war chief from Tofino. He said that historically, his smaller tribe was able to fend off a much larger and more powerful tribe from conquering them because the English gave them guns to protect themselves. As with the burning of churches, the Communists here are using the First Nations people by lying to them so they can exploit them.

As we have seen, Hong Kong was far better off under British rule than Communism.