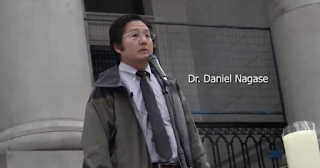 CBC, the Communist Brodcasting Corporation, is reporting that "A doctor who was filling in at a rural Alberta hospital says he treated three COVID-19 patients with ivermectin, triggering a warning from the provincial health authority about the dangers of the controversial drug. In a video circulating on social media, Vancouver-based Dr. Daniel Nagase says he administered ivermectin in September to patients at the hospital in Rimbey, Alta. Nagase claims provincial health officials are withholding a life-saving medication from an entire province." They are!

The CBC misinformation goes on to declare that "Ivermectin is often used to rid livestock of parasites. It has not been approved for use in either Canada or the United States for the treatment of coronaviruses and no clinical studies have proven whether it can slow or stop the spread of the coronavirus responsible for COVID-19 in humans."

"Alberta Health Services (AHS) has received complaints about Nagase, who has worked as a fill-in doctor at the Rimbey Hospital and Care Centre, 65 kilometres northwest of Red Deer. AHS says he is spreading misinformation. 'Neither the veterinary nor human drug versions of ivermectin has been deemed safe or effective for use in treating or preventing COVID-19,' reads an AHS statement issued earlier this week."

The question is why not? Why hasn't it been approved? We saw the same misinformation campaign about hydroxychloroquine. They said hydroxychloroquine was unsafe. They lied. Hydroxychloroquine is FDA Approved for the treatment of malaria and lupus. They give it to pregnant women. Saying that it is unsafe is a bold-faced lie.

Now we see the media lying about ivermectin. They kept calling it a pig dewormer saying it was not for human consumption. They lied. Instead of reporting India's success with ivermectin, they went on a misinformation campaign to discourage its use.

The Pharmaceutical companies are making billions from this vaccine. Money that could be spent on cancer research and treatment. They are manufacturing a false emergency to distract the world from a real one so they can steal tax dollars from a legitimate cause.

CBC was caught red handed lying about the Covid hospitalization rates in Manitoba. They didn't make a mistake, they intentionally lied. That revealed their political agenda. It doesn't take a trained investigator to see that. Preventing Canadians from trying safe drugs to treat Covid is a criminal act. It shows they want to increases deaths to promote their dark agenda.