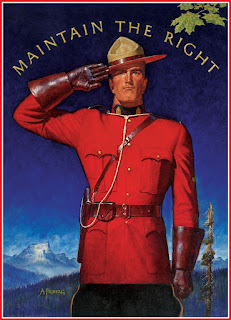 We saw the first responders protest vaccine mandates in Calgary and Toronto. 50% of the firefighters and law enforcement in LA and New York are refusing the Covid vaccine. Well now we have Mounties 4 Freedom penning an open letter to RCMP Commissioner Brenda Lucki.

"We respectfully submit this open letter to express our most sincere concerns and resolute stand against the forced coercive medical intervention of Canadians, and against the undue discrimination experienced by those exercising their lawful right to bodily autonomy."

"We are not against vaccinations, but as law enforcement officers, we cannot in good conscience willingly participate in enforcing mandates that we believe go against the best interests of the people we protect." Here, here! Oath Keepers Arise.

"As Canadians, our constitutionally-protected freedoms precede the government, and may only be temporarily limited if the majority of evidence justifies such infringements as reasonable, provable, and guided by law. If presented with all available evidence in a court, we firmly believe the government implemented mandates would not hold up under scrutiny."

That is the root of the legal challenge. There is a provision within the Charter suspending those rights in times of emergency. We can legitimately argue that clause should not be there. We can also legitimately argue that the manufactured emergency does not warrant a temporary suspension of those rights. Covid is not small pox. Covid is not polio. The real numbers don't even come close. We also have to address the falsified evidence used to promote the globalization narrative. The same number of seniors died this year as last year and the year before. The overall death rates do not show we have experienced a pandemic.

The letter continues to state: "In August 2021, Canadian Prime Minister Justin Trudeau announced, Federal public servants need to be fully vaccinated, and that for those without a medical exemption who choose not to be vaccinated: There will be consequences. Since that statement, many federal employees have been told they will be sent home without pay for refusing to receive a contested medical treatment."

"We have united in the belief that people should not be forced or coerced into receiving the current COVID-19 treatments – it should be voluntary. We stand united against the forced and coerced medical intervention of Canadians and against the discrimination faced by those who have exercised their right to bodily autonomy. We believe in democracy, the Canadian Charter of Rights and Freedoms, and the Bill of Rights."

On March 28, 2022 Ontario will be lifting the Vaccine passport requirement for all remaining settings. Which makes forced vaccination as a condition of employment now ridiculous.

"Each year, on the 11th of November, we remember those who sacrificed their lives for our freedoms. From Flanders Field to Juno Beach, many Canadians have bled and died fighting tyrannical nations. We need to remember past events to prevent the repetition of history’s greatest mistakes. We find it ironic that an organization that preaches the honour and respect of Canadian values, and the sacrifice of their veterans, would support actions that contradict the values our veterans fought to uphold." Word.

Appendix A – This is an open letter from Dr. Eric Payne, a pediatric neurologist in Alberta

Appendix B – This is the Canadian Covid Care Alliance Declaration

Appendix C – This is a letter from Dr. Byram Bridle, a viral immunologist in Ontario

Appendix D – This is a letter from Health Professionals United to the Alberta Health Services.

Appendix F – This is a report from Dr. Tess Lawrie from the United Kingdom

Appendix G – This is a comprehensive report comparing natural immunity to COVID-19 vs Vaccine-Induced Immunity. It was comprised from several scientists from Ontario and BC.